At Linden Leadership we are often asked to help cross-functional teams collaborate more effectively. One client asked us to work with a set of four teams that were performing poorly. Each team was responsible for a different phase of implementing and rolling out product changes. For successful implementation of these changes, it was vital that the teams worked closely and

communicated regularly about the status of joint projects. 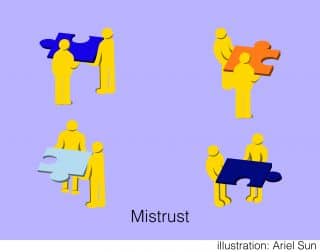 Each of the teams was in a different reporting area of the company. They therefore focused on their own productivity and performance measures, which had no obvious relationship to the productivity and performance measures of the other teams. Trust between the teams was low and animosity was high. Each team had developed its own beliefs about why the other teams were dysfunctional and were the cause of all the problems. Handoffs between the teams were awkward and often late. At one point, management had implemented software to track projects and streamline inter-team interactions, but this had no discernible effect on how well the teams collaborated. Their work often resembled a race to the bottom, with everyone undermining everyone else, and everyone’s work looking bad.

Human behavior is determined by how people feel—their emotional state—far more than by what they think. In fact, recent brain research suggests that effective decision making requires emotions, and often cannot happen in the absence of emotions.[1] We don’t figure something out and then have the emotion that goes along with that understanding. Rather, we have an emotion, and then we come up with a rational explanation for why that emotion is justified.[2]

Our relationships with other people can strongly influence our emotional state. If we are feeling down, positive relationships can lift us up. If our relationships are not going well, they can bring us down. Positive emotions cultivate creativity and innovation, as well as trust and collaboration. Trust and collaboration are the foundation of teams; when people trust one another, they collaborate well[3]. Relationships and emotions form a feedback loop which has a profound effect on how well teams form and perform. It can create dysfunction, superb performance, or anything in between. 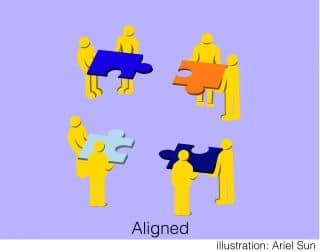 relationships, and practice what they were learning together. That gave all of the individuals on the teams basic skills for recognizing and regulating their emotional reactions, and for developing more effective ways of responding and communicating with one another. This was essential for what came next.

We then facilitated a conversation among all members of all the teams about what worked and what didn’t work in how they collaborated. This was done in a session that included the leaders, managers and members of all four teams. The very act of having that conversation opened people’s eyes to the challenges and frustrations that others had. It also gave people a chance to learn why their own behaviors could be interpreted as insensitive, obtuse or obstructionist to others. These conversations were quite challenging for many people. Individuals had to back down from strongly held opinions about one another, examine themselves to understand how they contributed to the problems, and recognize that they would all fail or succeed together. Some members of the team said that what they learned most was the importance of humility and empathy.

As we continued conducting these sessions, conversations among the teams became more open, listening improved and performance started to rise. Had we stopped there, some would have considered the engagement a success. But we knew that if we stopped there, they were at risk of old behaviors creeping back in, and the teams could end up back where they started. So we worked further with them to establish three critical foundations for building and maintaining effective teams:

The shared intention, language and practices became touchstones that they used to quickly become grounded and focused when tensions or dysfunctional behavior began to arise. They also became essential elements of on-boarding new team members. These skills were transferable: when these individuals moved to new teams, they were effective at identifying and counteracting dysfunctional behavior. 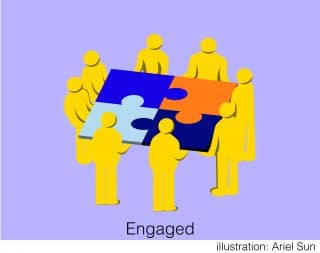 Teams are the lifeblood of many organizations. Creating effective teams, especially when they are frequently forming and re-forming, is not easy. It’s not something you can just figure out and do, like a process. If you attempt to create or improve teams purely intellectually, sharing ideas but not addressing relationship dynamics that determine how people feel, you will fail—and you will breed cynicism along the way. Human emotions are complex. They can create chaos or order. Which you get will depend on the quality of relationships among teams, and among the individuals within those teams.

Tom Goodell is President and founder of Linden Leadership. Since its inception in 1987, our mission has been to guide clients in creating cultures of high performance. Tom provides executive, management and team coaching; leadership training; and culture-building services in a wide variety of organizations, including entrepreneurial businesses, large corporations, government, education, and not-for-profit institutions. Tom’s areas of expertise are in establishing organizational cultures of high performance.

Your GPS For Relationships

The Power of Assessments and Assertions